This is the note of dipole radiation pattern calculations in a multilayer structure.

The numerical realizations can be found in my Github.

My previous calculations are not helpful since we can not get the emission pattern. In previous cylindrical expressions, the integral in $\mathrm{d}k_{\phi}$ has been transformed into Bessel functions via

If we extract the information of $\mathrm{d}k_{\phi}$, our previous expressions can also be used to get the emission pattern. However, to make this easier to understand, we use plane waves to expand Green’s tensor.

We will use Green tensor to get the dipole’s emission! 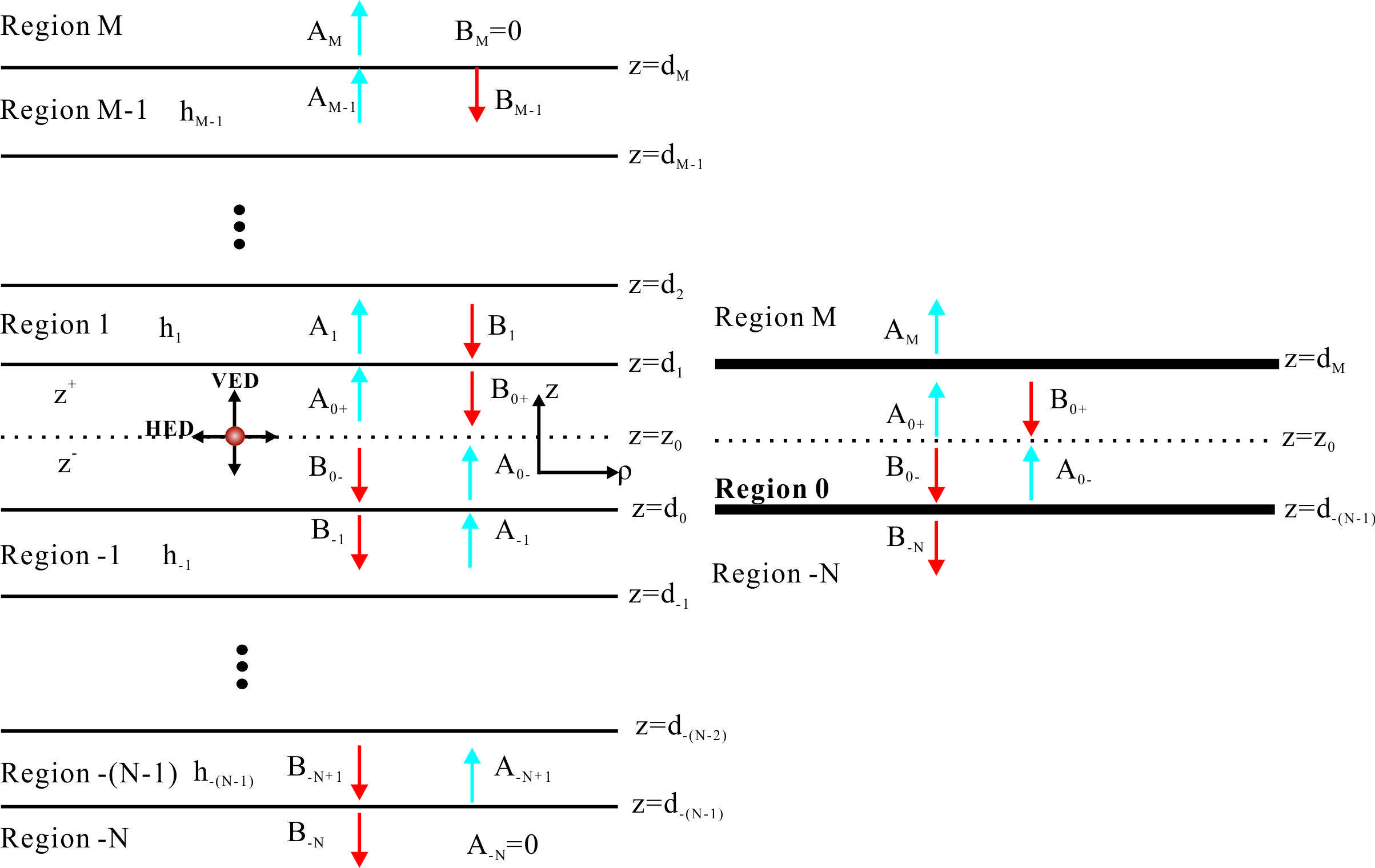 where $R=|\boldsymbol{R}|=|\boldsymbol{r-r_0}|$ is the relative distance and $k_{B}^2=\omega^2\varepsilon \mu$ corresponds to the wave number in the background medium. We can do Fourier transform of Green’s tensor as

and we can express the Green’s tensor as a Fourier transform of each wavevector,

Since we assume that the layers, which will be added later, are perpendicular to the z axis, we first perform the integration over $k_z$ using calculus of residues. Hence, we muse ensure that the integrand vanishes for $k_z\rightarrow\infty$ and rewrite as

Now that we have the plane-wave expansion of the Green’s tensor for an infinite homogeneous background. It is a simple matter to include additional layers. Indeed, the effect of these layers will be to add two plane waves, one propagating upward and one downward, to each Fourier component, The amplitudes of these additional components are determined by the boundary conditions at the different interfaces. Since the Green’s tensor represents the electric field radiated at $r$ by three orthogonal point sources at $r’$, the boundary conditions depend on the polarization of the corresponding Fourier component. It is therefore advantageous to introduce a new orthonormal system
$\boldsymbol{\mathrm{\hat{k}}}(k_{Bz}),\boldsymbol{\mathrm{\hat{I}}}(k_{Bz}),\boldsymbol{\mathrm{\hat{m}}}(k_{Bz})$

we can rewrite the Green’s tensor as

To obtain the Green’s tensor $\mathbf{G}\left(\mathbf{r}, \mathbf{r}^{\prime}\right)$ for a stratified medium, we can now superpose to the free-space Green’s tensor of a homogeneous medium $\varepsilon_l$ the additional terms by formally writing

where $k_{l}^2=\omega^2\varepsilon_l\mu_l$ and $k_{lz}=\sqrt{k_l^2-k_x^2-k_y^2}$. The tensors $\mathbf{R}^{s \uparrow},\mathbf{R}^{s \downarrow},\mathbf{R}^{p \uparrow},\mathbf{R}^{p \downarrow}$ can obviously be interpreted as generalized reflection coefficients that take into account reflections from all existing surfaces. For the explicit calculation of $\mathbf{G}\left(\mathbf{r}, \mathbf{r}^{\prime}\right)$ it is necessary to consider separately the two cases $z>z_0$ and $z<z_0$. each component of the Green’s tensor is expressed in terms of s- and p-polarized upgoing and down going plane waves with amplitude coefficients $A_{l,\alpha\beta}^{s/p},B_{l,\alpha\beta}^{s/p}$

We need express each component of the Green’s tensor and then we can write the field distribution for an arbitrary orientate dipole. And the coefficients can be obtained from the outer layer to the emitting layer. It’s necessary for us to write the explict form of the Green tensor. We write the Green tensor as

We need write the explicit form of the tensor,

For the s polarization

In above expressions, $R^{s/p,\uparrow\downarrow}$ are the total reflections in the emitting layer, we define the reflection coefficients in the upper space for each interface as

the same with the lower space

the reflections can be calculated iteratively from the outer layer

In the upper space

In the lower space

The field expression and emission pattern

And we can write the electric field as

Since the s and p polarized field are orthogonal, then we can express the far field power as

where the emission pattern is

Our previous expressions are not suitable for numerical implementation since there are maximum numbers in the exponent. To let is more applicable we rewrite the expressions. We define in the upper space

and in the lower space

If we use these expression, The green tensor should be

In the upper space

In the lower space

Relations of amplitudes in different layers

In this section , I will complete the derivations of the relations of $G_{\alpha,\beta}$ in different layers. The boundary conditions in each interface can be written as

For convenience we need write the Green’s tensor into a more simple from which can be used to express the boundary conditions. We can express the total green tensor as

where $F_{A/B}$ is the coefficients before A,B. Since only the component $k_{lz},k_{l}$ is related to material properties, we could write $F_{A/B}$ in a more simple form as

where $U_{A/B}$ contains only the coefficients without $k_{lz},\varepsilon$. We write the explicit form for each as follows.

Then in deriving the relations of coefficients between different layers, we can only use

which is more convenient to write. For convenience, we could also write the Green’s tensor as

so that the boundary conditions can be written as

So the relation between different layers has been derived and agree well with the reference.

Still for the relation

In this section a brief review of dyadic analysis is presented. Dyadic operations and theorems provide an effective tool for manipulation of field quantities. Dyadic notation was first introduced by Gibbs in 1884 which later appeared in literature. Consider a vector function $\vec{F}$ having three scalar component $f_{i}$ with ($i = 1,2,3$) in a Cartesian system, that is

Which constitute a dyad $\overset\leftrightarrow{F}$ given by

It should be emphasized that

ref1. Accurate and efficient computation of the Green’s tensor for stratified media ↩ 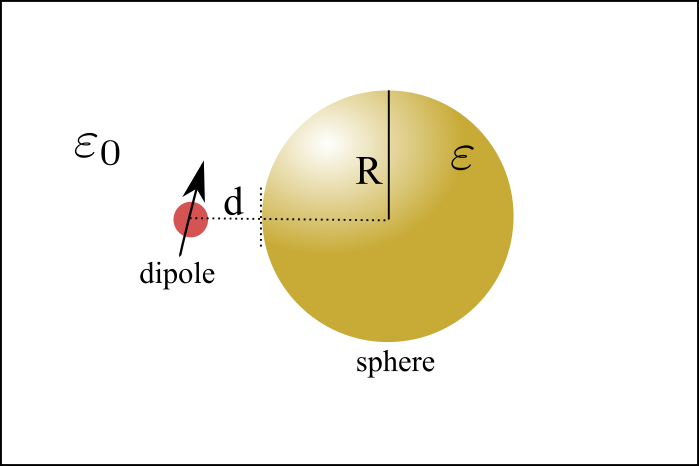 How To Embed Animation Into Jupyter Notebook 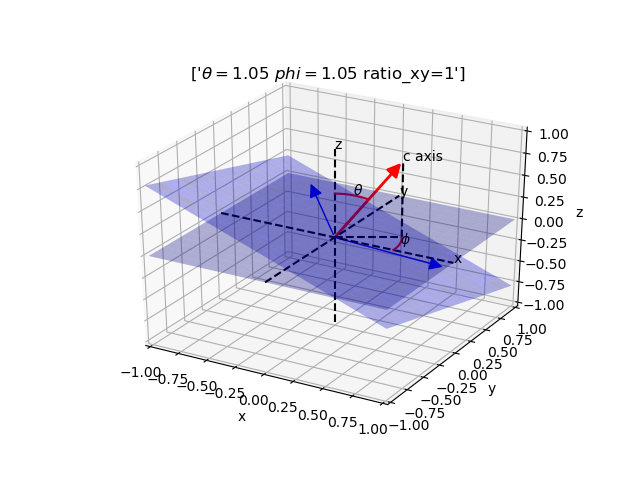