In quantum nano optics, we often encounter this kind of problem:

Simulating the scattering of light by a nano objects on substrate.

This note will firstly derive the theoretical expressions of the transmission properties and then introduce its implementation in COMSOL.

The Chinese version of this derivations can be found in

I will derive the transmission and reflection of plane waves in a two medium interface.

For any plane wave, when it is transmitted and reflected on the surface of the medium, due to the difference between its polarization direction and the direction of the incident surface, it can be discussed in two cases

Pay attention to the positive direction of the figure below. Because of different definitions, the final expression will have a difference in sign. All my next derivations are based on the following figure.

That is to say, any plane wave $\boldsymbol{E}$ can be written as a combination of S polarization and P polarization

We assume that a plane wave is incident from medium 1 to medium 2. We stipulate that the direction of $\boldsymbol{n}$ is from medium 2 to medium 1. The electric and magnetic fields need to meet the corresponding boundary conditions

According to the definition shown in the figure above, we can decompose the field and wave vector separately. Whether it is P polarization or S polarization, the wave vector can be written as

In order to obtain the reflection and transmission properties of the geomagnetic field, we need to analyze it according to the boundary conditions. We define the incident electric field in medium 1 as

That is, the refractive index can be expressed as

For a plane wave, the relationship between its electric field and magnetic field is

The power density of a plane wave can be expressed as

The average power density can be expressed as

For S polarization, first, the tangential component of the electric field $\boldsymbol{E}$ is continuous

Then the tangential component of the magnetic field $H$ is continuous

For P polarization, the tangential electric field is continuous, that is

Then the magnetic field is tangentially continuous

Following the same transformation, we can get

This result is consistent with the book Principle of Nano Optics. As a result, this derivation made me more familiar with the so-called Ferrell formula. It should be noted that our derivations are based on specific graphs, and different graphs will have different symbols.

Nonetheless, be aware that the literature is not standardized, and all possible sign variations have been labeled the Fresnel Equations. To avoid confusion they must be related to the specific field directions from which they were derived.

According to the Fresnel formula,

Considering $n{1}>n{2}$, at this time $\theta{1}<\theta{2}$, increasing the incident angle continuously, there will be an angle that makes the transmission angle equal to 90 degrees, which is generally It is called the critical angle, $\theta{c}=\arcsin(\frac{n{1}}{n_{2}})$. If you continue to increase the angle, the wave passing through the interface will decay exponentially along the z direction.

although there must be a transmitted wave, it cannot, on the average, carry energy across the boundary.

Let’s analyze the specific physical process of light and then total reflection. The previous transmission and reflection coefficients are further expressed as

In $\theta{1}\ge\theta{c}$, there is an imaginary number in the radical. In this case, the numerator and denominator of the reflection coefficient is just a complex conjugate difference, but the square of the modulus is equal to 1. That is, all the energy is actually reflected at this time. Of course, this does not mean that there is no energy passing through the interface, but it is attenuated in a short distance after passing through. We can write the transmitted wave as

That is, the final field can be expressed as

The previous is the basic derivation, the analytical expression of the theory, this section will derive how to set it in COMSOL. When setting up COMSOL, you need to pay attention to the following points

I think this example can be analyzed in more detail in the follow-up. Here I will briefly describe the information that this example can give us. This example was originally intended to allow us to save of theoretical setting and directly calculate the background field numerically. In the old version of COMSOL5.1, there is no evaluation angle and Azimuthal angle to define the incident angle. We can see the definition process from the example Scatter on Substrate, as shown in the following figure 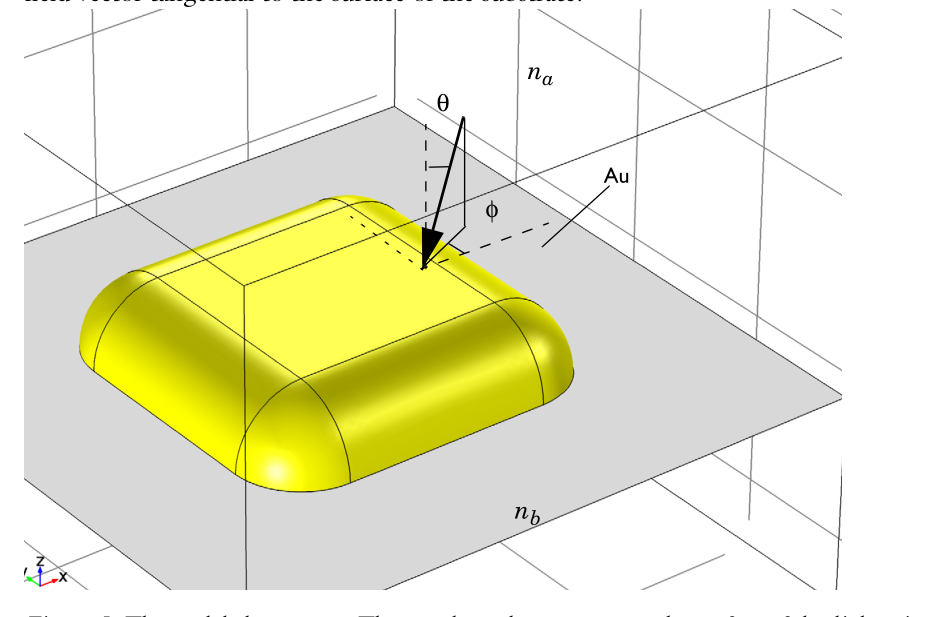 A beam of horizontally polarized light strikes from above, so the incident wave is not necessarily a plane wave. The expression for its electric field is written as

We can see from the above expression how to turn the analytical expression into an example in COMSOL. Because it is incident from top to bottom, that is, incident along the -z direction, so kz are all negative numbers. This example only sets a field in the port plane. In practice, what we need to set is the background field in the three-dimensional space, which will also participate in the z coordinate.

The second thing to talk about is the incidence of plane waves from bottom to top, with glass below and air above. This model is used to calculate that in Wang Zhiyuan’s experiment, light is incident vertically on the glass, and there are gold nanoparticles on the glass. The model has multiple calculation methods

I finally chose the second one. The advantage is that the background field is analytically accurate. The disadvantage is that the background field needs to be calculated manually, various parameters need to be calculated, and a thorough understanding of the properties of reflection and transmission is required. The following are some settings when calculating.

As you can see, I set it according to the s-polarized incident mode. Therefore, the incident and reflected fields of the Ex field are directly added. This is very important, because what I want to calculate next is the setting method of p-polarization.

This is to calculate the oblique incidence. When we set it specifically, SiO2 is on the bottom, and the plane wave is incident from the bottom to the top, from the negative X direction to the positive direction, that is, the polarization is in the X-Z plane. Then correspondingly, the incident wave in this coordinate system should be written as,

In the glass layer, the total field is the superposition of the incident field and the reflected field, and the sign of different components needs to be considered when superposing.

In the air layer, the total field is the transmitted field

I have encountered a lot of pitfalls in COMSOL settings. Here are the things to pay attention to.

With the above derivation, let’s now set up COMSOL. The first is related variables

Then there is the background field setting, in the glass layer

This is to calculate the oblique incidence. When we set it specifically, SiO2 is on the bottom, and the plane wave is incident from the bottom to the top, from the negative X direction to the positive direction with a azimuthal angle $\phi$, Then correspondingly, the incident wave in this coordinate system should be written as,

In the glass layer, the total field is the superposition of the incident field and the reflected field, and the sign of different components needs to be considered when superposing.

In the air layer, the total field is the transmitted field

Now I will COMSOL implementations here.

Direction in port-Plane wave input via port in COMSOL

How to use COMSOL on server

How to use COMSOL, MATLAB and COMSOL livelink with MATLAB on Server